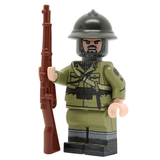 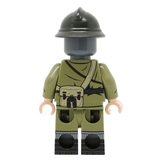 Arditi (from the Italian verb ardire, "to dare", and translates as "The Daring [Ones]") was the name adopted by a Royal Italian Army elite special force of World War I. Alongside the German Stormtroopers, they were the first modern shock troops. Reparti d'assalto (Assault Units) were formed in the summer of 1917 by Colonel Bassi, and were assigned the tactical role of shock troops, breaching enemy defences in order to prepare the way for a broad infantry advance. The Arditi were not units within infantry divisions, but were considered a separate combat arm.

The Reparti d'assalto were successful in bringing in a degree of movement to what had previously been a war of entrenched positions. They won numerous engagements armed mainly with daggers and hand grenades, which proved very effective in the confined space of a trench. Their exploits on the battlefield were exemplary and they gained an illustrious place in Italian military history.