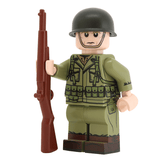 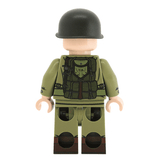 The M1943 uniform was introduced in 1943 after first being tested in Italy. The field jacket featured extra pockets compared to the 1941 field jacket, and was more comfortable. To replace the separate canvas leggings, new M-1943 Combat Service Boots included an integrated leather cuff that was fastened by two buckles. As World War II went on, an improved version of the field pack was developed and issued. The Field Pack M-1944 was made of olive drab canvas and webbing in OD #7 colour, and was based on the M-1941 USMC system.

The M1943 uniform would be used through the remainder of WW2 and into the Korean War with modifications before being replaced by the OG-107 uniform beginning in 1952.