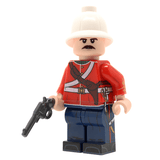 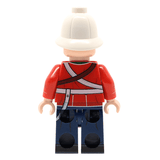 Officers' weapons consisted of the 1822 pattern Infantry Officers' Sword, with a steel scabbard, carried suspended by two slings from a white leather sword-belt. Revolvers were carried in a brown leather holster, often strapped over the shoulder.